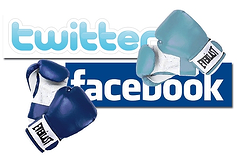 Mark it: 3/4/11 at 11:39am EST, I am calling it. Twitter will overtake Facebook as the 'go to' social networking and media outlet.

Why? Well, it all started in a crowded bar on President's Day, 2011. It was an odd mix of us that had come together to celebrate a day off from work. My husband and I, an old friend from High School we hadn't seen in years, and my cousin in law. Upon entering the bar, my hubby and I noticed a group of other Happy Hour attendees that had obviously been there way too long and were quite loud and obnoxious. So what did I do? Make 'em famous of course!

I simply took out my Droid, snapped a picture and uploaded it to Facebook--all within a matter of seconds. Within a minute more, I received a text from my cousin in law "Ah, I see from Facebook, you guys are already there." --Wow--that was fast..even TOO fast.

After busting his chops that he Facebook stalks me, he bet me $100 I couldn't stay off Facebook for 3 weeks. Seriously? I haven't eaten meat since 1995, I have some seriously strong will power.

Sure, the first week was hard--I could look, but no updates, likes--not even a poke! Then--I realized there was much more outside of refreshing my news feed--like books! And playing with my dogs!

But alas, my prediction isn't just because I happened to find something outside of Facebook--no... enter @CharlieSheen.  When before he had even posted 1 single Tweet--he had a quarter of a million followers..and a mere 23 hours later had 1 million--and EVERYONE was talking about it...so quickly, in fact that his 140 character messages, pictures and trends were picked up by major news networks, non profit orgs (check out @RedCross) and the term "TigerBlood" had immersed itself into popular culture in a matter of minutes.

I soon found Facebook to be boring--I'm busy--and don't have time to sift through someones 100 line note about their recent trip, or comb through 150 pictures of their baby. Give me the good stuff baby...

A recent tweet sums it up perfectly "Thank you Twitter for making the world condense thoughts into only what is important."

As a corporation (ah since this IS a corporate blog) I have found that posting on Twitter is much easier and a better avenue for us--I don't feel stressed having to write something meaningful for Facebook.  In fact, many orgs I do like on Facebook, have the same information on Twitter but more condensed--and if it requires more space--I just click the link provided and are directed to their site.

Further, when we added a hot trend (ie: #TigerBlood) and combined it with a Fundraising Convention we are attending in a few days (#AFPMEET) in a recent tweet; our post (and corporate image) was seen by millions of followers of both trends...all in a matter of seconds. This is the power of Twitter over Facebook.

So you ask, how am I doing with my bet? Well today, someone asked if I was dead as they haven't seen me post in a few weeks--too bad I couldn't reply. But I should be $100 richer in a few weeks and may shut down my account. Thank God for cousins.