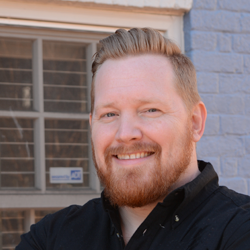 Andy Rogers has recently returned home to Direct Answer after 21 years away. Direct Answer was Andy’s first summer job as a high school student in 1995, where he managed the mailroom of the then newly-started company. Andy attended the Virginia Military Institute where he graduated with distinction with a Bachelor’s of Science in Computer Science with a minor in Mathematics. He was commissioned in the US Army as a Transportation Officer. It was in this role that he got his first taste of logistics and the critical role that logistics play both in commerce and combat. He served in Afghanistan as an Air Logistics Officer during the opening days of Operation Enduring Freedom and conducted over-the-road logistics as a Detachment Commander during the push to Baghdad during the Iraq invasion in 2003. His unit convoyed over 1,000,000 miles, delivering mission critical supplies, everything from food to medical supplies to air defense rockets, to front-line personnel. During his time in the Army, Andy worked with all major logistics channels – air, sea, rail and road, and was a certified Unit Movement Officer.

Upon separating from service, Andy went to work as a defense contractor, where he spent the next decade employing his wartime logistics expertise to numerous programs, most notably as the Operations Lead for Kestrel, a wide-area surveillance system developed to protect Soldiers and Marines in Afghanistan. In this role, Andy was responsible for deploying over $1.5 billion dollars worth of sensitive equipment and for staffing, training, moving, and managing over 150 sensor operators, analysts, and forward-support engineers where were embedded with combat units at over 16 Forward Operating Bases in Afghanistan.

As the Vice President of Direct Answer, Andy is bit of a "utility infielder." He is responsible for Distribution and Logistics Operations, Production and Print. He was instrumental in the creation, design and implementation of a full service Collatoral Fulfillment Program for of one of the largest grass roots campaigns within the 2016 Presidential Election cycle.  "On Day 1 we had a rough concept of how the program should work,. By Day 14 we had a need to fulfill over 1600 orders per day, with thousands of picks per order. That combined with the need to generate relevant designs for bumper stickers, hats and signs, it is one of my most memorable logistical challenges yet!"